In the next 48 hours, American all across the country (well, half of them anyway) will head to the polls to cast their votes for President. But what does it mean to have a vote that counts? In the year 2000, sitting in Florida, watching that election unfold, I think I have never been closer to having a vote that counted. For a true cynic, sure, my one vote would not have changed the election. However, with a margin of ~500 people, it wasn’t lost on me that I actually knew enough people that had we all voted together, it could have changed the entire election. You can’t get much closer to a vote that counts than that.

In 2004, the election was not nearly as close. With a margin in Florida of almost 400,000, I certainly didn’t know enough people to swing that one. After that I moved to Maryland, and any illusion of a vote that would change the outcome of an election completely disappeared; Maryland is a state that has voted Democrat by double digit margins for years, with no signs of a change. Regardless of if you are voting Republican or Democrat, the outcome here is fairly certain. Of course, Maryland is not alone. 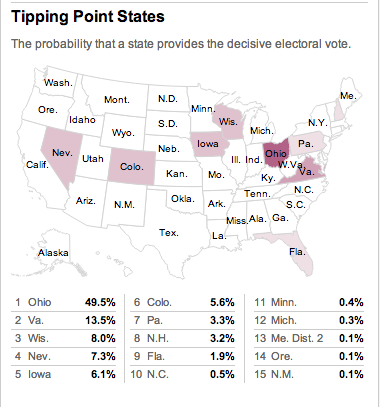 The above graph lists the “likelihood your state will determine the presidency” (source). If you aren’t in one of those states, the truth is that your vote means very little to the outcome of who becomes president. This isn’t to say you shouldn’t vote; it never hurts to take part in the political process, and to be sure there are always a number of state level initiatives that are worth voting on. Some would look at that and say that for most people, voting for president doesn’t really matter. Normally I’d agree, but this year there is a chance that things could be different.

While I’ve no illusion that they will win the election, this year the Libertarian party has the chance to do something significant: obtain 5% of the popular vote. If that happens, they will be eligible to receive matching funds for 2016. While this isn’t significant to the two majority parties (who have opted out of the program so as to not *limit* their fundraising), for a third party this would be a major milestone. If you’ve been dissatisfied with your party, or you live in a state where the outcome is solid, I’d urge you to join me in voting for Gary Johnson. Even if you don’t agree with all of their policies, you probably agree with some; but whether you do or not, the real issue here is getting the Libertarian party to 5% also means getting a whole slew of issues up for discussion which are sorely lacking from the current two-party system we’re working under. That’s something that would count, and definitly something worth voting for.

A veteren free software developer and advocate, I tend to speak and write about open source and large scale web operations, although most people know me from my work on or around the Postgres project, where I was recognized as a Major Contributor.